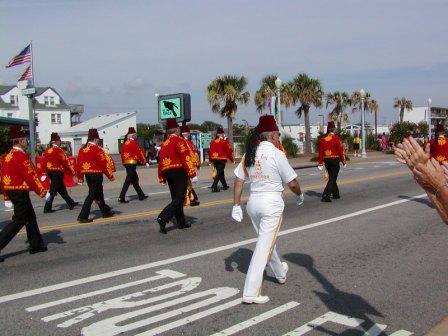 Meetings Every 2nd and 4th Monday @ 7:30PM in the Patrol Room

The Lu Lu Patrol celebrated its Centennial Anniversary in 1996. The Patrol is one of Lu Lu Shriner’s elite and oldest units, it provides a lifeblood line of support for most Temple activities and projects. Any Lu Lu Noble who is in good and regular standing is eligible for membership. Out Patrol meets at the Shrine on the 2nd Monday and the 4th Monday (General membership) each month; the dress is casual attire. The initiation fee is $20 and annual dues are $15 and cover the calendar year Jan.-Dec 31.

The distinctive uniform of the Patrol consists of red bolero jacket, black pants, black bow tie, gold sash, white gloves and special fez. Lu Lu Patrol is one of only two Temple Patrol units in North America authorized to wear a special fez with out Temple name followed by the word “Patrol”. Yes, we really do stand out!

The Patrol is the front line Color Guard of the Temple at all parades, stated meetings, and special Temple events including the Potentate’s Ball and Unit-Club and Officer Installation in January. The Patrol competes annually in September at the Mid Atlantic Regional Shrine Association meetings where it has taken 1st and 2nd place trophies in recent years. Patrol members assist at many Temple functions such as Bingo, our annual Hospital Paper Crusade, and Shrine Hospital events. The Patrol supervises parking at our annual Rodeo and Circus fundraising events and also conducts Blue Lodge visitations.

Other activities include our Spring MAASP business-golf weekend and annual December Holiday Seasonal Party. The Patrol even has a Masonic Degree team that assists local area Blue Lodges in conferring degrees. You might say the Patrol has something for everyone!

Each year on the 4th Monday evening in June, the Patrol hosts a get-acquainted Captain’s Picnic in the Temple Quadrangle, to which all newly entered nobles and their families are invited to attend.